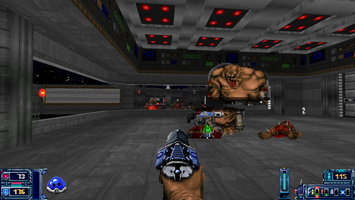 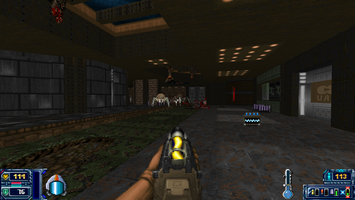 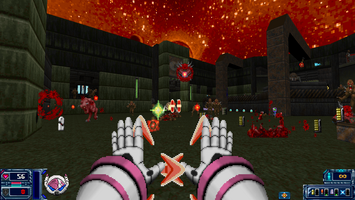 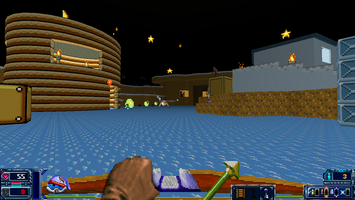 This is it, the big update I've been workin on since November of 2019. It's been a long time coming, but I'm glad it's finally here, I hope you all enjoy this hard work I've put forth.

+Arti now has a HUD face! Get a rough idea of how he's doing with just a glance at his mug!

+Arti now has unique player sounds! (Still has the classic HEH HEEENNNHHH for his taunt)

+Updated glow frames for the skull keys (thanks Skelegant)

+New customization screen: the pistol start CVAR is here now, along with a DAKKA style option (Reset your ammo, keep your weapons!)

+add a crate contents CVAR, now you can choose what exactly you get out of crates!

+Some weapons have fancy brightmaps

+There's now a visible meter timer for the rad boots

=Changed up the fullscreen HUD to be similar to the standard HUD, just with forcescaled

!CRATE WEAPONS NO LONGER HAVE INFINITE RELOADS. In fact, they don't even reload anymore! They now use a new resource: Crate Energy packs, which can be found near any cell based pickups. Infinite reloads and crate curse sucked anyway.

+Pocket Revenants buffed, primary fire now always throws them, secondary deploys a rally flag to summon any active Skellies to the point, added more variants in the box (they all behave the same)

=Crates no longer can be shot open, you now open them by walking into them like any other weapon

!OVERHAULED THE ENTIRE SET. Nearly everything has either been polished, improved or just flat out replaced

=Set has been renamed to Artificer

-Berserk upgrade for fists is now slower, less durability is granted with the powerup

-Lilk's Axe no longer has homing altfire shot, that thing was busted OP

-Lilik's Axe deals 4x less damage when not powered up

-Lilk's Axe no longer has +FORCEPAIN (What the hell was I thinking with that?)

-Sharpshooter caltrops produce less shrapnel when detonated with the altfire

!MOST WEAPONS GOT A NEW PAINT JOB. Everything now has more vibrant colors, helps make each weapon look more distinct!

+Added the Past Linked set